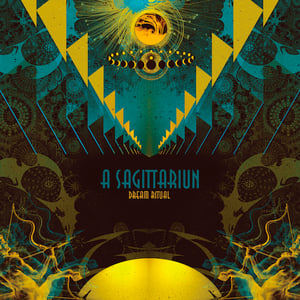 The shadowy UK techno artist, A Sagittariun, releases his debut album this November, to coincide with the Sagittarius zodiac period. “Dream Ritual” comes off the back of a steady stream of well received EPs from ‘The Archer’ on his own Elastic Dreams label, releases that have captured the imaginations of the electronic community for their depth and diversity, where old techno breaks collide with Detroit techno aesthetics, ambient dub sits alongside industrially charged electro, and many more sound palettes inbetween. A 2012 Resident Advisor podcast perfectly encapsulated the A Sagittariun mood, and the uninitiated should definitely check this out.

“Dream Ritual” continues this journey through moods and tempos, each track sprinkled with this stargazing quality. Opening track “Sundial” sets the tone, the percussive elements teasing in and out of a melodious, thick analogue cloud.

The album weaves its way through a heady mix of sounds, be it the old skool breakbeats of "Conquering Lions” and "A Lucid Dream”, the driving classic techno sounds of “V4641 Sgr”, “The South Node” and “Network Restoration”, industrial slabs of dub funk on “The Age Of Sin” and “Seven Locks (In Dub)” and the concentrated jazzy electronica of “The Mind Has No Time”.

“Dream Ritual” represents the versatility of A Sagittariun, and presents a collection of music for the listening experience as opposed to a dancefloor record, hopefully following the lineage of some of the classic techno and electronic albums that have paved the way and most definitely influenced A Sagittariun on this record.